My book, Survival, is based on my experiences in the Holocaust. You can find it available on Amazon.com, or read more about it on my website.

Survival is an autobiography in which the author relates her experiences and her struggle to survive during her captivity as a young, 18-year-old girl in the three German concentration camps: Auschwitz, Bremen, and Bergen-Belsen.

"Before us now is her 'magnum opus' called Survival. Magda Herzberger describes in her book the fight between life and death. It is a 'death-dance' (known as 'Totentanz'). The naked reality of the death camps is before our eyes. Total lack of compassion, inhumanity, and despotic harshness is the daily reality of her and her fellow inmates. Magda Herzberger looks in vain for human understanding among her captors. In that unbelievable hell, she finds human voices only in her sensitive heart. She prays. She believes in a better future."

Survival gives an insight into the author's childhood and adolescent years, where the concept of anything like this happening was beyond belief. The reader finds out about her family background and the historical events that took place in her native city in Romania/Hungary during that time. The political changes which occurred during World War II played a crucial role in her destiny and the fate of the Jewish people.

Magda also conveys how she coped with the grief and pain of losing so many members of her family, including her father, in the Holocaust. Then she speaks about her gradual recovery from the wounds of the Holocaust and her ultimate reunion with her mother.

Magda's poetry is included in the book.

All quotes are from the Foreword by Dr. Moshe Carmilly-Weinberger.
Posted by Magda Herzberger's Blog at 3:22 PM 1 comment: 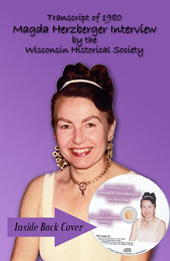 Hello. I have a new book out called Transcript of 1980, Magda Herzberger Interview by the Wisconsin Historical Society. It also includes 9 hours of oral history on a mp3 cd that is included with the book.

Also, please make sure to visit my website, http://www.magdaherzberger.com, for upcoming new books and announcements.


When the first oral history interviews with Holocaust survivors appeared, they tended to focus only on wartime experiences. Archivist Barbara Kaiser of the Wisconsin Historical Society thought this approach was flawed, since it artificially isolated the horrors of the Holocaust from the rest of the narrator's life.


So Kaiser designed a series of interviews with Wisconsin survivors that discussed not only the Holocaust but also their family history, their childhoods, their post-war lives, their experiences as immigrants, and their opinions of America. In 1979 and 1980, she arranged 22 of these interviews, including this one with Magda Herzberger. All the Wisconsin interviews are online in their entirety at wisconsinhistory.org.
Magda's is one of the most remarkable. It opens with her descriptions of a loving family in the Jewish community of Cluj, Romania, during the 1930s. It recounts her teenage years, when Hitler's rising shadow spread eastward and her adolescent pleasures gave way to anti-Semitic persecution. Then, at an age when most young people are enjoying high school, Magda endured the nightmare of Auschwitz, performed slave labor in Bremen while Allied bombs fell all around her, and barely
escaped death at Bergen-Belsen.
But this interview is more than a Holocaust memoir. Magda also describes returning home, starting medical school, and falling in love. She explains how, witnessing the rise of Stalinism, she and her husband fled their native land for Palestine, only to be imprisoned by the British. She relates how
they endured more than a year in an internment camp on Cyprus.
She provides eyewitness account of the birth of Israel and of starting a new life in the United States in 1957. She shares her feelings about her adopted country, about parenting and family life, about being Jewish in a small town in the Midwest, and about deciding to speak and write publicly about the Holocaust.
Posted by Magda Herzberger's Blog at 8:25 PM 1 comment:

Promote Your Page Too

Magda Herzberger's Blog
I am a Holocaust survivor, writer and author of books that are available on Amazon, Borders and Barnes and Noble bookstores. Please make sure to visit my website, www.magdaherzberger.com. for new announcements and upcoming books. Please visit my Twitter page at www.twitter.com/magdaherzberger.